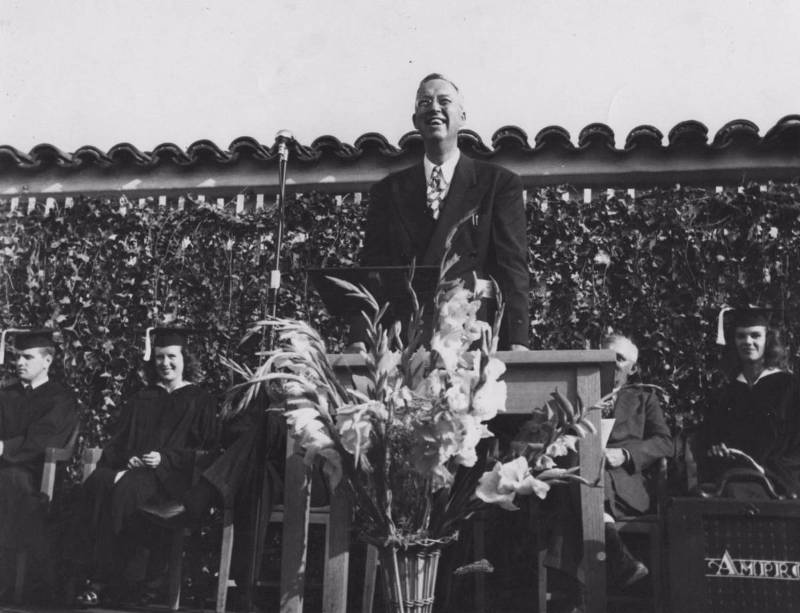 The Mt. San Antonio Community College District was created in December, 1945, when voters of four local high school districts approved the formation of a community college district. Initially known as Eastern Los Angeles County Community College, the institution was later renamed Mt. San Antonio College after the most visible snow-capped mountain (popularly known as Mt. Baldy) in the distance behind the campus.

The 421-acre campus was originally part of the 48,000-acre La Puente Rancho. During World War II, the facility was converted into an Army hospital and later a Navy hospital.

Mt. SAC opened in the fall of 1946 with 635 students occupying a few Spanish-tiled buildings and temporary Navy barracks clustered below the San Jose Hills. Walnut, not yet an incorporated city, consisted of very little except dirt roads, cacti, and grasslands covered in the spring with wild mustard grass.

Mt. SAC has emerged as a leader in education not only in the San Gabriel Valley, but in the state. It is California’s largest, single-campus community college with a combined Credit, Continuing Education, and Community Service student enrollment of over 65,000.

While maintaining low fees, the college provides advanced academic training and state-of-the-art laboratories thanks to community support of more than $500 million in bonds for campus facilities. Powered by dedicated teams of faculty, staff, and administrators, the College remains committed to keeping college within reach, providing quality programs and services, as well as building an environment for educational excellence throughout the 21st century.

Print Options
Back to Top

The PDF will include all information unique to this page.